The Camel and the Racehorse - A Parable

Tony Blair is not a clever man.  He is not a gifted mathematician or economist. He is not a political philosopher or moral thinker. He may never have read a whole book, if the leaden prose of those he has “written” is anything to go by. The only innovation he consistently practised in both opposition and government was doing whatever his experts told him to do to win. Those same experts have been scripting his public face ever since.

This is not the man you’d call if you urgently needed – for example – a guide to metaphor in the modern novel.  Or to metaphor and interpretation in the Q’ran.  You certainly wouldn’t think of him when trying to explain a mysterious technological hiatus lasting over 1500 years.

Richard Bulliet, on the other hand, might be worth calling on for any of these purposes.

He wrote a book called The Camel and the Wheel. This explains why (contrary to what most westerners might assume) the Islamic world really didn’t need to build its economy around wheeled transport for a very long time. Rather than this being because of technological backwardness, it was because of an advance in saddle design that enabled trade (including the supply chains that armies need to function) to work without good roads. That advance in saddle design only mattered because camels are really good at surviving, and carrying vast loads, in situations where horses – no matter what sort – are a bit rubbish.

The vast reach and longevity of the various Islamic empires from their first expansion in the century after Muhammed up to the close of the Nineteenth Century CE was built on the carrying capacity of camels, and their freedom from roads. Wheels, by contrast, don’t make you faster unless you have a surface they actually work on. If you can stop roadbuilding, you save vast amounts of work that can be deployed instead to – for instance – build cities, libraries, mosques, or schools of philosophy and medicine and mathematics.

There is, however, one thing that camels were much less good for even in the warfare of that era. Horses make better weapons. Because of the difference in shape between a horse and a camel, as well as the horse’s far greater speed when unladen and at a sprint, cavalry charges were always more effective when done with horses. Cavalry charges tend to be more effective on favourable ground and against lightly armed infantry or unarmed civilians.

But this is not the mythology Tony Blair is attempting to draw upon when he makes this claim: 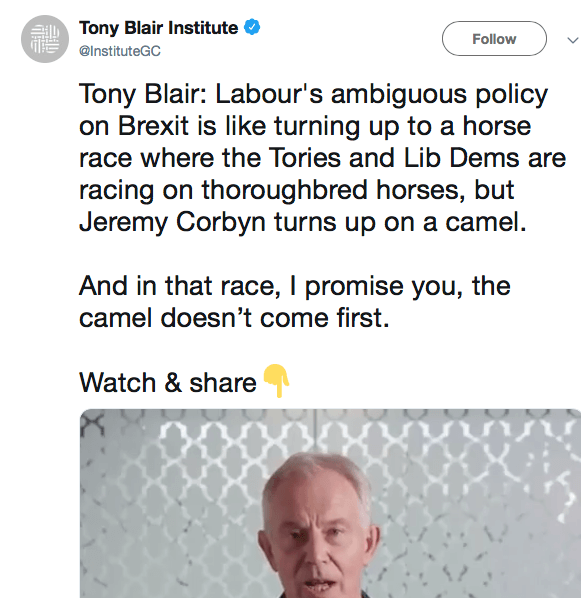 What the famous warmonger actually recommends in the talk given is – amusingly – precisely Labour policy as it in fact currently is. That is, a renegotiation of the terms of Brexit followed by a second referendum. Not very complicated or ambiguous. This is convenient, because it enables him to insist that he is not being in any way disloyal and that anyone taking issue with him should have listened to him for the full five minutes of his presentation.

Given that Blair’s campaigning style was always about soundbites, soundbites and soundbites, we probably shouldn’t see him as being genuinely honest about this. What TB intends to communicate here is not the meat, but the tweet.

What the tweet explicitly tells us is that Blair wishes us to regard Labour policy as “ambiguous” – although it’s not. What it is very deliberately intended to implicitly convey is a sense of Jeremy Corbyn being somehow not really Western, not really up to speed with the modern world, riding an animal that’s faintly ridiculous. It’s intended also – and I am suggesting that this is deliberate as well as deliberately deniable – to create a powerful association of the current Labour leader with a symbol of Islam, and thereby to draw on and feed popular Islamophobia.

But let’s read this metaphor against Blair’s intentions…

As we’ve seen, throughout history camels were primarily bred as draught animals, which raced, slowly but successfully across several of the world’s major trade routes for over a millenium. The expression “ship of the desert” works because of the vast amount they were able to carry through areas where less well-adapted animals simply wouldn’t (and didn’t) survive at all.

Now, Brexit isn’t like a “horse race” in the sense TB wants you to imagine – in which there’s a finish line at a pre-arranged point a mile or three along a nicely-mown course. It is more like a sea, or a desert. There is not even a fixed finish line. There is just the certain knowledge that tomorrow you will have to load up and start again, with all the baggage you picked up along the way, and with only the stars above to navigate by.

It’s only a metaphor, of course.

But if metaphors are what we have to ride, my money is on the camel.
Tagged blairbrexitcamelscorbynmetaphor