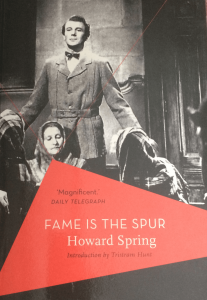 Tristram Hunt has a name tailor made for rhyming slang.

Still, he knows a great deal about Labour history, and he can write.  He’s every bit as articulate as you’d expect from the best education money from buy, and has an impeccable pedigree in Labour aristocracy. Not in the sense of belonging to a skilled working-class group with a relatively large amount of collective bargaining power.

No, not that at all.

No.  In the literal sense.

His dad’s in the Labour Party and he has four generations of aristocracy amongst his ancestors.

None of this would be a problem if he was on the side of the working-class in the present day.  Or if he was one of those rare, usually fairly conservative, historians who believes that knowledge of the past affords no superior view of the future.  He isn’t though.  He is so nakedly anti-working class that he managed to draw condemnation from Tom Watson.  For crossing a picket line to give a lecture about Marxism.

He is thus a wildly inappropriate choice to provide the forward to Fame Is The Spur.  As well as being a poetically, hilariously, right choice.

Most of Hunt’s foreword is a straightforward recitation of the storyline; presumably so that you don’t have to bother to read the long book that follows. In eight pages, only two paragraphs refer to the savage and grinding poverty of Nineteeth century Manchester which forms the background of the (sizaable) early years of the story.

This is odd. This poverty, and the causes of it, inspired Engels’ Condition of the Working Class in Manchester.  The intellectual understanding that resulted, in combination with some Scots, German and French influences, was key in what came to be known as Marxism.  As a book Fame Is the Spur lingers on the formative years of its John Hamer Shawcross, its protagonist, and features Engels himself in a cameo. Hunts know this and points it out, but prefers to have us focus on Shawcross”s own feelings – his self-justifications – in his dying years.

Despite being a historian, Hunt appears rather better here at creating questions than answering them.  He doesn’t tell us anything about the author beyond one unreferenced quotation that is framed so as to give the impression of being an isolated comment.  This seems an unfortunate omission given that Howard Spring wrote an autobiography in three volumes , and that his wife wrote a book about their life together.  For us it’s a particular shame, given that Spring’s Welsh roots would reasonably be expected to inform his  outlook.

Ho hum.  Because it’s unreferenced, of course, we can’t tell whether it’s an isolated comment or not.

It would be somewhat surprising if it were though,  given the bitterness of the political  perspective encapulated in it, and throughout Fame is the Spur.

" ... the formal distinctions [between the political parties have] melted; the three old gangs [have] fused into one amalgam, one sort of man; just a politician."

It is six hundred and them some perfect pages on the sociology of selling out, in the form of a story a writer who depended on his words could sell.  And it was the perfect counterpart to MacNeill Weir’s non-fiction dissection of Ramsay MacDonald that had appeared only a year earlier.

Howard Spring, incidentally, really did depend on his words.  He was a Cardiff boy who had left school at twelve years old on the death of his father, through night-classes in shorthand and journalism, into work at the Yorkshire Observer and the Manchester Guardian, before he started writing books.

He knew the worlds he fictionalised in Fame Is The Spur intimately, most especially that of the childhood poverty he had to write his way out of.

Instead we are told that “Fame is the Spur sits outside Howard Spring’s canon of more family-based sagas, but brings to the study of politics a popular novelist’s gift” (p. xiii).  This is, as centrist Labour history usually is, arse-backwards. Spring became a popular novelist because of this political analysis, and it is the only book he wrote that is still commonly read. 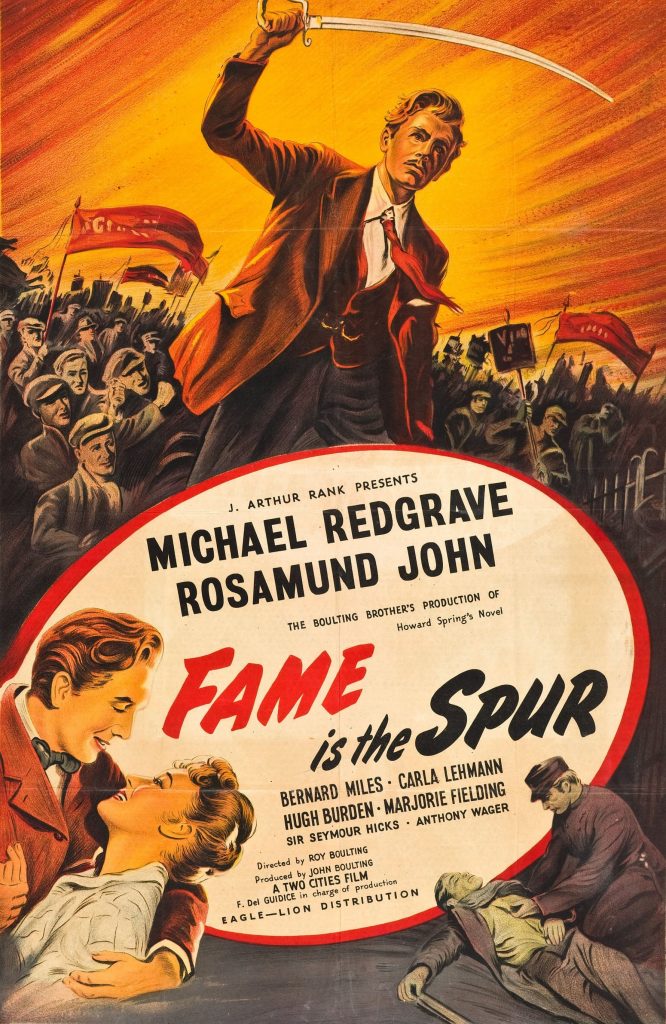 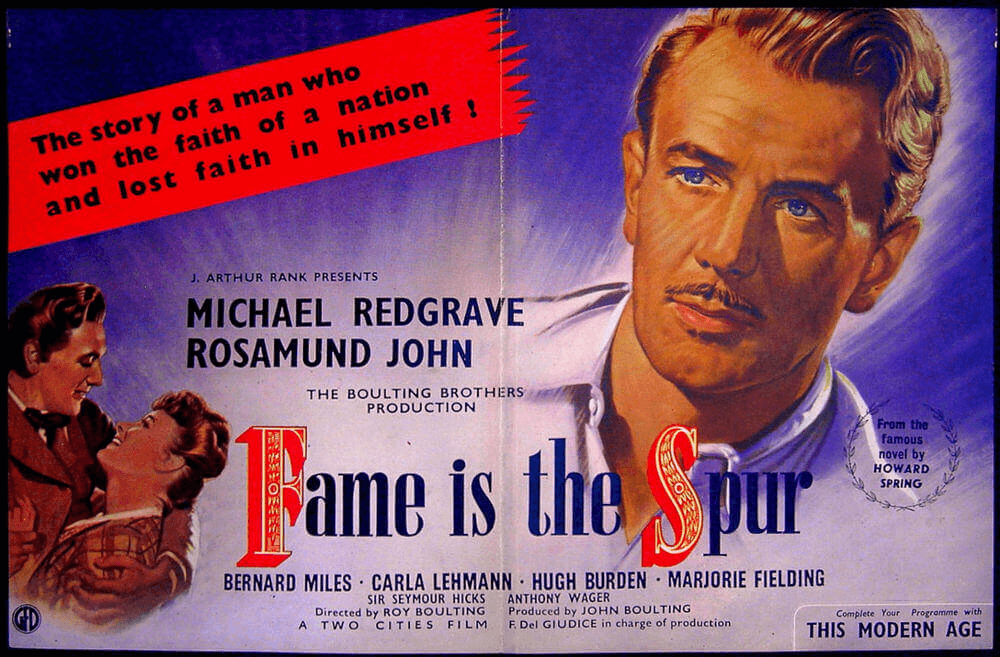 The last two pages of the forward are a New Labour tour-de-force in turning a book against itself.  It’s made to sound like a good thing that the treacherous and fame-driven Shawcross “never falls for the bleak Marxism of Soviet communism” (p.xii).

But Howard Spring was writing at a moment when Nye Bevan was still expelled from the Labour Party for being willing to make common cause with communists against fascism.  Shawcross’s refusal to deal with the economic facts of poverty, and the need to redistribute wealth and power instead of punishing the poor for the failings of the rich, were not something aside from his betrayal of his background, but the wellspring of it.

And what of today?  This is a cynical tale, which can only cement the fervent convictions of Labour Party leader Jeremy Corbyn’s followers, that the Parliamentary road to socialism is inherently flawed. (p.xiii)

You might think, from this, that Hunt had spent more time than Corbyn in parliament.  In fact, Hunt left under a dense assembly of clouds, after a single five year term as a Labour MP, having been parachuted into the safe seat of Stoke-On-Trent against the local Labour Party’s wishes.  Still, at least he gets Howard Spring’s foundational plotline.

Hamer Shawcross's fame-hungry journey from Peterloo to Parliament is a salutory tale of the Establishment embrace, from which true socialism needs always to immunise itself.

The Parliamentary Road to Socialism

Why Wales Never Was

It is poignant in this context that Tristram Hunt left Stoke-on-Trent amid controversy; straight into a plum job as director of the Victoria and Albert Museum. His parliamentary career had been spent in relentlessly attacking his own leadership – and membership – for being too socialist for his taste.

We should not be surprised, accordingly, that Hunt doesn’t want to help us grasp the “salutory tale” the book is woven around, but instead seeks to deconstruct and undermine it.

Howard Spring wrote a great work on the corruption of power, showing how it could infect even those who could have been driven by their sense of history, by their class, or by the burning sense of how they experienced injustice in their own life.  Even whilst it bears witness and explains the human weaknesses that drive corruption, it condemns them in narrative form – as consisting in already-existing moral weakness that others do not succumb to.

Fame Is The Spur is not a book that forgives the betrayal of socialism, even though it is sophisticated enough to show us one manner in which it happens. To the best of my knowledge (I look forward to being corrected) there has not yet been a great novel about the kind of treachery Hunt committed – about the abuse of socialists and the working-class by those who ride on the wings of public school privilege, personal connections and public broadcaster celebrity.

But because of what he shares with Shawcross, Hunt would prefer it if nobody noticed the need for such analysis at all, and is thus – desperately – pointing us away from the obvious and bitter message at the core of the novel.  He seeks to distract us with the possibility of his own personal redemption. As if that comes as an added extra with public school fees.

John Hamer Shawcross was a sell-out who betrayed the people who made him, and who he took his strength from, because he thought that he was better and bigger than them.  Just like J.H.Thomas did to the Trade Union movement and Ramsay MacDonald did to the Labour Party and the unemployed.  Tristram Hunt is a sell-out only because he never ceased to represent the privileged class he came from, despite playing at politics for long enough to destroy lives through his hypocrisy.  The kind of treachery differs; but more unites than divides them.