Four Scarecrows and a Funeral

Exhibit A: God Save the Queen (but in Irish)

You could be forgiven for thinking that the Irish were never great fans of the British monarchy.  Especially if you happen to be Irish.

In 1900 Maud Gonne called Victoria  “the famine queen”.  That viciously evocative name has determined Irish perceptions of monarchy since at least 1916. It’s become more important in determining the meaning of history than the cordial welcome the Irish bourgeoisie gave to Mrs. Saxe-Coburg-Gotha on both her official visits to Ireland. But, if you’d been watching Dublin’s mad parade whilst betting on the battle between Maud and Victoria, you’d probably have backed the royal.

See for yourself, below:

My point in referring to Ireland here is a very obvious one, but it’s profound and insufficiently explored amongst political commentators.  So I’m going to make damn sure you can’t miss it by putting it in a red box with an irritating entrance graphic:

Exhibit B: 70 years on the throne

Bearing the irritating red box mind in mind, consider the picture below.  These ‘scarecrows’ have now been removed from the verge in Llanon. They are no longer part of visible public opinion, except insofar as they’ve been framed by the competing people, groups and agencies that structure effective public opinion. 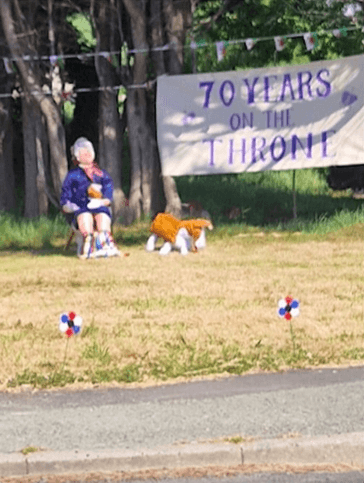 I actually passed as this exhibit was being erected, and had a hearty chuckle.  Then I thought no more about it until I saw the nation.cymru article in which Ceredigion Council condemns it as “distasteful” and proudly announces that it’s been removed “from council land”.  Which is to say, our land.

So, no matter how bleedingly obvious the harmless double entendre of “seventy years on the throne” is, you are not allowed to publicly show the toilet-related joke.  It is just too closely related to the – unarguable – fact that Elizabeth Windsor is human in all the same ways as the rest of us.

I’d guess that some of those entering the scarecrow competition were actually lukewarm royalists with a crude sense of humour: and that the revelation that they are not allowed to express it has brought them into the republican camp.  Feel free to argue the case, but the sane ones amongst you will concede that a mild and ambiguous visible public opinion has, in this small instance, been pushed toward an angry, tactically aware, and therefore potentially effective republican opinion.  Those who were outraged by the “distasteful” scarecrows, on the other hand, have not changed their opinion at all.

The net effect of the episode, therefore, has been to create some more effective republican opinion.  But not in a way you’d pick up in the statistical analysis of visible public opinion.

You won’t see this, of course, in an opinion poll.

Let’s look at why this matters.

Barn recently ran a poll-based feature by Richard Wyn Jones on attitudes to the monarchy in Wales.  The standard of my Welsh means that my interpretation of it is filtered through the article nation.cymru provided on the basis of it.  So feel free to question my sources.

The central message (though not the headline) of the article is that most people in Wales are monarchists.  Whilst the young are more likely republican than the old, and Welsh-speakers more likely  republican than their English-monoglot neighbours, the only serious discontent with monarchy in the population at large stems from its cost.

Wyn Jones counsels republicans not even to be excessively optimistic about the less monarchically-inclined younger cohort surveyed.

I’m far from sure that there is much comfort to offer republicans even from focusing solely on the young. Time will tell, but I wouldn’t be surprised if many of these become more partisan of the monarchy as they age.

It would be nice to see a causal mechanism specified here.  Will the young become more monarchist as senility erodes their reasoning?  Or because birthday wishes from the monarch becomes a serious lifegoal as you enter your nineties?  Will the children of the sixties end their days thinking that the Changing of the Guard is high-quality entertainment?  For what it’s worth, my guess is that Wyn Jones is constrained by his public role from crowing too loudly about how great it is that the young and the polyglot are massively more likely to be republican than are the older generation and monoglots.  After all, even if it’s true, you can do a lot a damage to your favoured causes by going round singing “tomorrow belongs to us” (as he’s sort of doing earlier in the article) without an attendant note of sober caution.

My suspicion is that, had opinion polling been a commonplace in the Ireland of 1900, similarly monarchist results would have obtained there.  Certainly there are young people amongst the huge crowds in the film above, and there’s little room for doubt that there were also a whole bunch of speakers of Irish Gaelic.

More importantly, perhaps, even most well-known ‘nationalists’ were in respectful attendence.  In fact, that’s why our friend Maud Gonne wrote her article on the famine queen, and she makes that clear very quickly:

‘The Queen’s visit to Ireland is in no way political,’ proclaims the Lord Lieutenant, and the English ministers. ‘The Queen’s visit has no political significance, and the Irish nation must receive her Majesty with the generous hospitality for which it is celebrated,’ hastens to repeat Mr John Redmond, and our servile Irish members whose nationality has been corrupted by a too lengthy sojourn in the enemy’s country.

Amazingly (given how things went in the end) Sinn Fein was also monarchist in its aims at the moment of its foundation in 1905.  The dominance of monarchy over visible political opinion was far greater than now seems to make sense.  The only way to make later events appear actually possible, rather than as republican miracles happening in a monarchical society, is by constantly repeating this mantra: 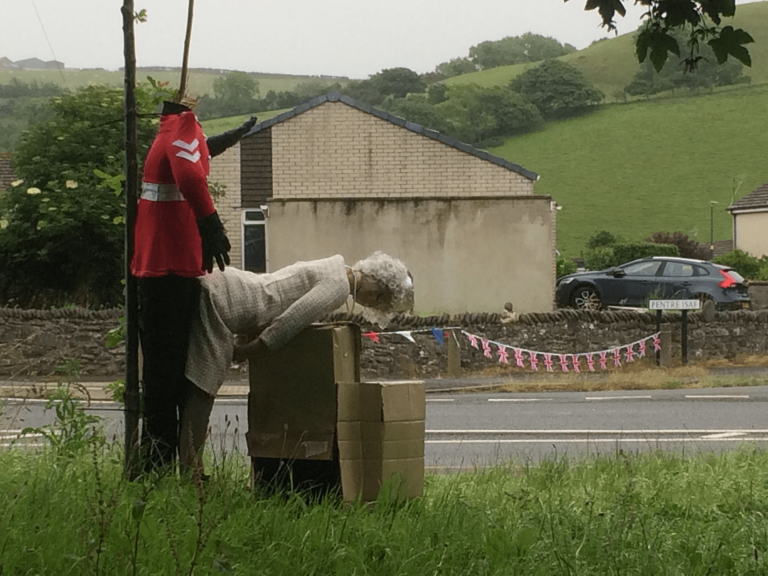 This is what was done to some scarecrows in Llanrhystud (the next village along the A487 from Llanon, and the home of the scarecrow competition) a few days after the council had removed the (now) relatively tasteful royal-on-the-bog display.

It seems like effective public opinion has started to recognise the essentially political nature of the made-up jubilee celebration (Platinum? Really?) and is subverting it even when and where visible public opinion is at its most assured.

The royals have been unmasked.  They turned out to be merely human, contrary to what it says on their emblem.  Even those whose political engagement stretches no further than answering a telephone poll for money consider them not to offer value for money.  And the prime spread of republicanism is amongst those who are most likely to take actions that work.

The polls will deceive for some time, and once the republic happens everybody will be mystified that they lacked the imagination to see it for so long.

It’s become popular for columnists of all shades of newspaper to date this possibility to the point at which Charles Windsor becomes king, because he’s less popular than his mum.  But in Wales, the same event is going to  create a fresh problem for the monarchists for an entirely different reason.

The ‘Prince of Wales’ (a title invented by Elizabeth Windsor as a nice present for her son) won’t have that title any more.  If it’s not passed on, it’ll be another massive hollowing out of the institution – a public admission that monarchy really is made up as it goes along.  If it is passed on, the costs – first monetary, and then moral – will become a matter for debate even amongst monarchy’s most enthusiastic adherents.