There’s no inevitable progress in human affairs, at least not if the quality of technical and biological illustration and science writing referenced here is anything to go by.

The natural history that these pictures are drawn from is at pains to attempt to put forward a scientific neutrality, even when it’s about something like the temperament of the camel.

It contains two opposing views from camel owners about the docility and intelligence of camels, in an interesting exception to the rule that westerners take the piss out of camels because it functions as a harmless stand-in for taking the piss out of foreigners.

Of course, the authors don’t get everything right.  They claim that the one-humped camel is “more servissable to man than its Bactrian ally.”  In fact, Bactrian camels can carry greater weights again than can dromedaries, an important factor in enabling the silk roads that dominated global land trade for the 1500 years or so up to the rise of the railroad and the motor car. 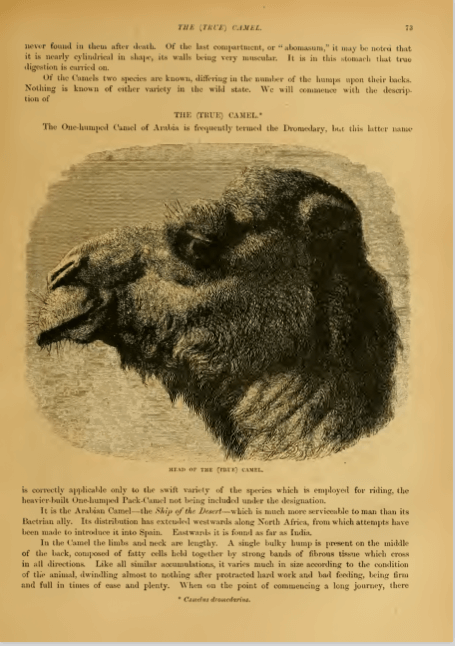 Most of all though, this author makes their column on the camels thoroughly readable, whilst introducing the late Victorian reader to the characteristics of camelidae in general, their scientific classification as tylopodae, and even to an unusual feature of the camel’s ruminating mechanisms that may actually make it possible for a camel to consciously control its own internal water use for digestion purposes.

The first picture is here.

Scroll down the resulting page to get to a pdf of the entirety of Cassell’s Natural History (1896), courtesy of the nice people at North Carolina State University who scanned it all for you. Sadly, no name is given for the author of each section of the natural history, but kudos is due.

Whoever you are, I know you’re long gone – but thanks for doing such a great job.