Colonialism and the Arabic Not: A Note

My interest in Arabic culture, as you might imagine if you’ve looked at this site before, stems quite directly from my interest in camels.  Whilst they originated as a species in what’s now North America, and the largest numbers of feral and wild camels are now to be found in Australia and Mongolia respectively, they are indelibly associated in the Western mind with the middle East and with Islam.

So when I started teaching myself Arabic (it’s going slowly, since you ask) I was surprised at the astonishing absence of camels in Arabic-language films and television. You might accuse me of having been in hock to stereotypes, and you would of course have been right (although, to be fair to myself, I do also just like camels a lot and find it a bit disappointing that this is unusual). For most of the unsentimental inhabitants of the Arabic-speaking countries, camels are a symbol of a distant past of nomadic poverty that oil wealth and modernity have released them from. That they carried the materials that built the roads and the oil wells on their backs, and before that almost the whole of the pre-twentieth century life of Arabic cultures for almost two milennia, doesn’t seem that important anymore. Similarly, I live in a bit of the west where horses and their relatives arguably played a similar role, and I have less than no interest in equine matters.

But the colonization of parts of the Arabic world that reached its height just after the last great camel caravans finished their journeys along the old silk road at the turn of the twentieth century, by contrast, is still a potent and unavoidable part of everyday life and culture. It’s a tiny aspect of that colonialism, in one location, that I want to look at today, with a note about how it relates, suprisingly for me, to an episode in Welsh history.

The place is Beirut, and the instances of colonialism I noted about it came from watching Phillipe Aractingi’s Heritages and Ziad Doueiri’s West Beirut.

In Heritages, Aractingi narrates his father being sent to a French Jesuit school in Beirut after his Francophile family had escaped Turkey following the treaty of Lausanne in 1923.  This was during the period of the French mandate, which ended in 1943.  His father hated school, because of (what the English translation calls) “the snitch system”.

In Heritages (the trailer on the right sadly doesn’t mention this episode), Aractingi narrates his father being sent to a French Jesuit school in Beirut after his Francophile family had escaped Turkey following the treaty of Lausanne in 1923.  This was during the period of the French mandate, which ended in 1943.  His father hated school, because of (what the English translation calls) “the snitch system”.

The “snitch system” was a teacher giving a block of wood to the first child heard speaking Arabic at the start of the day. If they still had it at the end of the day, they would be caned (this is dramatised with a tap on the hand in the film. I’m not sure it was that civilized). They could get rid of it by catching another child speaking Arabic and snitching on them. Aractingi’s father had a lifelong guilt about having caused his best friend to be punished for this, and this is and was clearly a motivating factor in Aractingi himself working to keep his whole family speaking Arabic even when they’ve fled Lebanon for Paris. 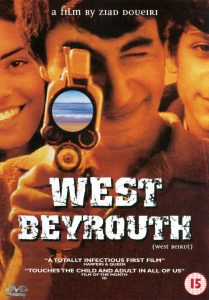 In West Beirut‘s opening scene, Ziad Doueiri’s teenage hero rebels, at another French school, by singing the Lebanese anthem, النشيد الوطني اللبناني‎ (al-washid al-watani al-Libnani), through a megaphone as the teachers lead the singing of the Marseillaise at the start of the day. It is a vivid and brilliant unmasking of the colonial dynamic of the French school still in Lebanon in 1975, as well as being a clever steal and subvertisement of the proud singing of the Marseillaise in the first scene of communal anti-Nazi defiance in Casablanca. The hero’s schoolfriends, like the French in Casablanca drowning out Deutschland Uber Alles, at first hesitantly and then defiantly, sing their own anthem.

As the teenage hero is told to leave his class in punishment, the teacher is expounding to the class the view that it was the French that made Lebanon civilized. In the street below, men with guns are shooting a bus full of civilians. French civilization, having failed to wipe out the native speech amongst those it educated in the colonial period, is still claiming its superiority as the divisions it bequeathed kick off in to civil war.

Those of you who don’t know Wales will perhaps be surprised to discover that the very same “snitch system” that led Philippe Aractingi’s father to betray his best friend, and to pass that guilt even into the memory of the present, should have been practiced in Wales too.

To my Welsh readers, by contrast, the question will be “why did you take so long to mention it?”

I’m not here just to point out an interesting similarity, but a rather more developed idea.

The snitch system as a form of linguistic discipline (or, as it was famously known in Wales, the “Welsh Not”) is something that I’m suggesting was employed solely in internal colonies and is the primary marker of them. Since watching those films, I’ve found it was used in non-French speaking areas of France, in the suppression of Canadian Gaelic speech, across the non-Russian parts of the Russian empires both before and after 1917, as the way in which Taiwan standardised its dialect, in suppressing as possible drivers of independent sentiment the languages of the Ryukyu Istands in the south of the “Japanese” archipelago, and in schools teaching native Americans as recently as the 1960s.

Two initial observations come from this, for me. Firstly, we should emphasize that these were attempts specifically to enforce internal colonialism, rather than colonialism per se. They were intended to make the colonized people into people who regarded themselves – accurately – as precisely of the same type as the colonisers. And, whilst this might be a consciously racist thing on the part of the colonisers, it could also be perfectly sincere despite its frequent violence and hypocrisy. In Beirut, the Lebanese Christians being encouraged to believe that they were French for reasons of realpolitik were also regarded as French by some of the French themselves – including some of those making the laws.

That’s precisely why Aractingi’s family has been able to run there to escape the post-imperial wars of Lebanon. Similarly, despite the horrific racism of its settlers, France’s population broadly believed in the idea of “Algerie Francais”, and tooted their car horns in protest in that rhythm at the very idea that Algeria could ever be let go. The aim – however much hypocrisy and falsehood and delusion was involved – was genuinely to make Algerians into Frenchmen. This aim is what internal colonialism is. There may be other reasons to regard the situation of Wales, like that of Okinawa, Ukraine, Lebanon, Algeria, Sioux and Cheyenne as having been subject to a process of “internal colonisation”, but this in itself is sufficient.

The second is that this attempt at internal colonisation was, in all these instances (and I suspect there are scores of others I’ve yet to discover) – to be achieved by making treachery the core value and method of the state and of education. Internal colonialism did not have to feature or function via massacre or poverty, though it generally also did this. The existence of internal colonialism, contrary to most thinking on it, does not depend on the success of resistance such that the colonised retain their difference from the coloniser. In fact, this is a sign of its failure. The internal colonial state, when successful, has suppressed internal cultural difference via the curriculums of its schools and the treachery of its children: it has replaced childish habits of solidarity with grown-up guilt and the individualistic terror of the snitch.

Of late, subtle historians have sought to destroy the claim that Wales was ever a colony. And the claim it was an internal colony has been roundly ridiculed, in the same way. The rhetorical question that comes out of this perspective, and desperately seeks to publicly shame anyone who really wants independence, goes like this:

“The Welsh owned slaves, how could they have been colonised?”.

Well, this is how, by the internal colonial state seeking to wipe out the differences of the Welsh and to make them identical to the occupier, by the state stealing their children and turning them into spies against the private languages and natural speech of their brothers and sisters and their best friends. And by turning those who witnessed that display of power into snitches and sneaks and scabs and cowards. That is how an internal colony is built.  It is how the French empire made many of those it colonised in Lebanon and Algeria into people who thought they were French.  It is how the American empire sought to wipe out the last possibilities of generational resistance by the children of the nations they destroyed.  It is how Japanese fascism sought and made collaborators for the Greater East Asian Co-Prosperity.