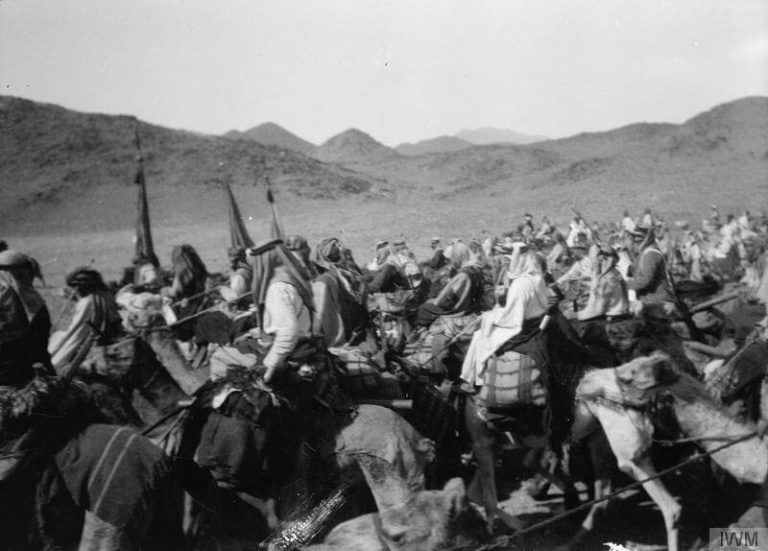 Despite the little “IWM” in the right-hand corner of the photo, this was not taken by the British Imperial War Museum.  Allegedly it was taken by T.E.Lawrence himself – though I can’t help thinking that the geezer in white in the middle of the shot is dressed much as he did through this time, and it’s a little before the age of the selfie.

As a little kid in junior school in the Britain of the 1970s (I’m of the last generation that could use words like “Britain” in uncomplicated fashion for a bit of our lives), I knew of “Lawrence of Arabia” because of the old movie, and because of “Commando” comic books and suchlike that referenced him.  So I bought Seven Pillars of Wisdom when I saw it dirt cheap being sold off from the library stock.  It was vast, and it was my first experience of a book that was something other than a kids story.  For weeks I was thrown into a world of astonishingly huge and strange words and feelings that I had never encountered in real life. Many were unpleasant, and I constantly hid it from myself, before finding it again and wondering whether something so strange could be real.

Or why anyone would invent it if not.

I took it to school for a weekly class where we had to read silently for an hour.

The teacher walked around the room, sometimes looking over our shoulders. She looked over mine, this time, and made me go and get another book from the shelves.  Apparently what I was reading was “too old” for me.  The same happened at another point that year, when I’d borrowed a copy of volume one of Capital – it was the seventies, there was no way the library was going to be getting rid of that for a while.  One of these two times (and I don’t know which) was the first time I was struck by the suspicion that state education was not really about imparting knowledge.

So I was surprised, decades later, to find Lawrence’s book being quoted as the epitome of “orientalism”.  I went back and read it again.  I can’t see it.  He confronts being gay in as near a way to openness as could have happened in the memoir of a famous figure of that time.  He confronts the lies and the treachery of the Britain that he was fighting for.  He’s open about the worst parts of himself.

He is bleak about the future and the present and he makes us feel why.

If I, like that teacher, wanted a schoolkid to be a proud young British boy without the complicated nightmares of Empire, I would have taken the book off them too.