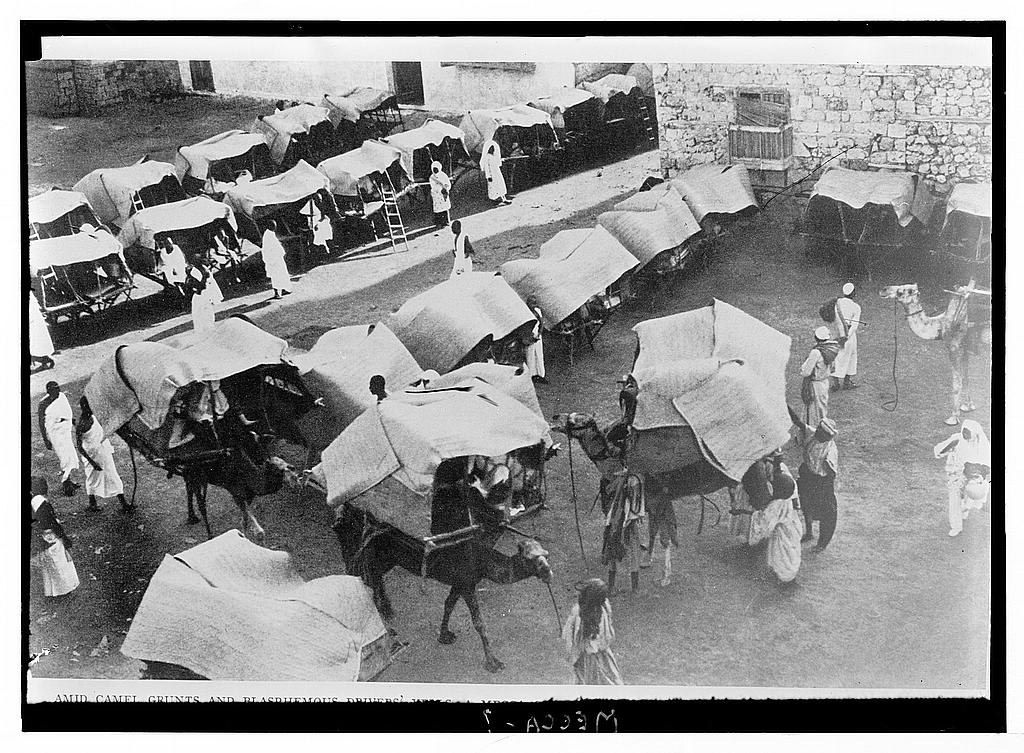 The shot above, from the Mecca pilgrimage of 1910, is from an archive that I’ve just stumbled on. I think is going to be a wonderful source for many more camel pictures, and for leads into the histories and cultures around the camel.

It’s the Matson Collection at the American Library of Congress: a photographic record by evangelical Christians in Arabia and Palestine from the tail end of the Nineteenth Century CE up to 1946.

You can find it here.

I’ll be delving deeper into that collection, and interrogating the ideas and lives of the people (and camels, obviously) involved in it and in the photographs that came from it.

For now, there’s one observation that jumps out at me from the photograph above.  This is that what we’re looking at is precisely analagous to a factory system. Contrary to common perceptions of the uncooperative and stubborn nature of camels, the straight lines and standardisation of the pilgrimage loading system here make it clear that Mecca depended on predictability rather than anything more mystical.

The palanquins on the backs of the moving camels are the same as those resting on the ground – so that loading one up becomes a simple matter of lifting one up onto the next camel in line.  Those involved in the work process are wearing clothes so standard as to effectively be uniform (although this may be heightened the picture being b & w).

Most tellingly, there’s clearly even been process-type thought put into the placement of ladders for mounting the pilgrims palanquins.  There’s a set place for them to go when not in use, but also – if you look at the loaded camels passing the camera, you’ll see there’s a good chance that these camels, before moving off, were arraigned side by side so that one ladder could be shared between them when the pilgrims came to mount up.

Frederick Taylor, eat your heart out.