Apologies for the dearth of camels over the last few days. I got excited and intrigued by a whole area of camel studies that led me deep into lots of reading that didn’t come with good copyright-free pictures.  The results of that will inform some future COTD entries and meditations on the role of the camel in history – but for now, it’s staying under wraps.


Along the way though, I did encounter an interesting tangential story.  Here it is, on the front and back of a postcard: 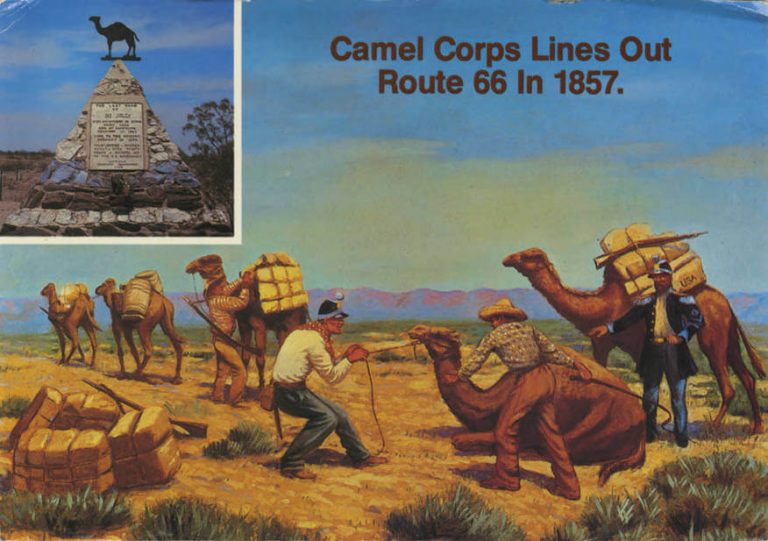 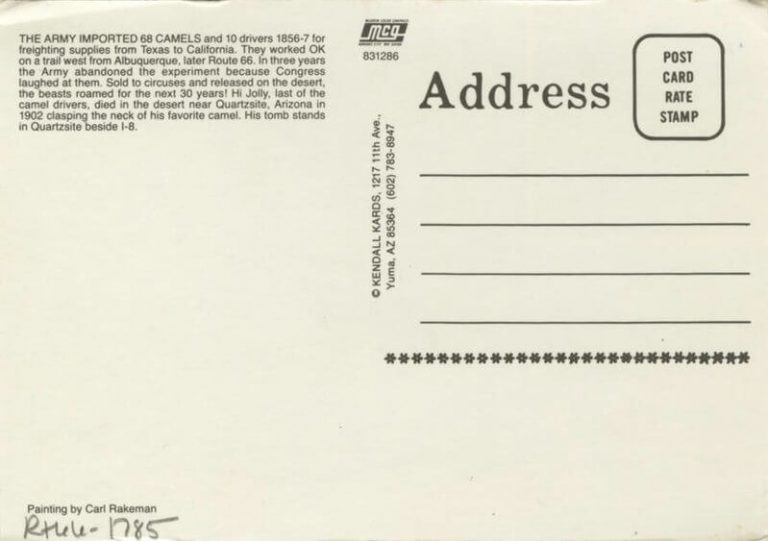 Oddly, camels haven’t played the role in American history that you’d expect, given the vast size of the deserts involved in creating a country as wide as a continent and including many of the hottest spots on earth.

We will follow up the demise of the US Camel Corps someday, and check the assertion that it was effectively laughed out of Congress.  For now though, it’s easy to see that the failure of the Americans to take full advantage of the availability of an animal better adapted to parts of their country could well have been related to a kind of anti-Eastern prejudice a lot like that which prevented the camel becoming a valued animal in Australia.

Case in point: the painting on the front of the postcode shows camel-handlers who are clearly having a hard time. It doesn’t show the Arab camel-handlers who were in fact hired, one of whom is mentioned in the commentary on the back of the card and memorialised by the statue on the front.  One story that might really have happened during the camel corps years forms the plot of the 1954 western movie Southwest Passage – which manages to, strangely and utterly unselfconsciously, combine the gleeful slaughter of Apaches with moralising lessons about treating the Arabs fairly because they’re on the same side.

Given the atmosphere of McCarthyism at the time – and the fact that the communists had been on the same side in the world war only nine years earlier – I think this film carried an important and clear message against the witch-hunt, said as openly as it could be in that climate.  If you have seventy-five minutes to spare, a high pain threshold for cliches, and a willingness to wait a while before the camels appear, check it out: